I had to return the Inventio-HD 720P because of an apparent hardware issue, I was not longer able to record or save/update to the memory drive on the device, tried everything but  something went awry.

Pivothead cameras already have been reviewed in detail online, below are links to some of the more popular reviews:

I will focus below on my impressions and use cases.

Pivothead has some pretty impressive specifications. We begin with a very high-quality Sony 8MP CMOS sensor similar to or better than the one in the current generation of iPhones.

The model I have is the Durango style with blue reflective lenses, which is kind of a traditional sports/leisure sunglasses style . Some folks think they look like cheap drug-store sunglasses, but their styling is pretty traditional, it’s not going to win any awards, but its also not going to look out of place.

Pivothead makes 4 different styles, so you should be able to find one that fit’s your needs. It fits pretty comfortably on the face, and even though the eyeglass frames along the ears are larger than usual , it doesn’t feel heavy or obtrusive. Also most models have interchangeable lenses.

Camera controls are placed on the left-side frame. atop the left temple a  rocker  controls video and photo shutter. Plus a small button on the bottom of the left side frame that powers the camera on and off.

Wow!  All I can say is I was impressed, the photo and video quality are really, really good, on par with my Contour camera. I first used them to record the Rutger’s Half marathon that I was running in and was pleasantly surprised by the results. I think the magic here is the high quality Sony sensor, that features really decent f-number and excellent Depth of Field and a slew of configurations similar to the iPhone sensor.

The video quality is equally as impressive, again the Sony sensor shines, providing decent focusing capabilities and decent auto-exposure. Head movement of course may make the video a bit more jerky, but the built in anti-shake lens feature did a decent job of minimizing small jerky movements.

Sound quality is also pretty good, if your riding a bike you may get alot of wind noise, but nothing a well placed piece of electrical tape can’t solve.

Also equally impressive is the codec used. Pivothead uses h.264 (mp4) files, so you actually get a very modern codec and decent file sizes , plus it doesn’t have to split your files. Most every other video sunglass camera I have used resorted to .AVI files which are very large and were frequently split which made them difficult to re-assemble for editing.

My only major complaint here is the limited  75° FOV (Field of View). After using these glasses for a while, you need to  be conscious to look dead center at something you want to get on video otherwise it will but outside the frame.

Here are some sample stills from a recent race I used them in. 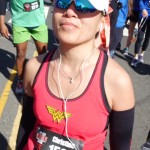 hey us that an Asian wonder woman 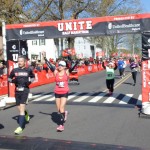 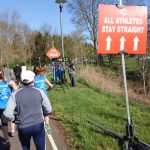 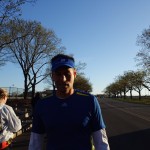 No software is needed to simply download photos to the PC just connect a micro-usb cable to the side of the glasses and it will appear as a USB drive on your pc.

While this is clearly the best video sunglass camera available today, it’s not perfect, there are a few things that would really make this better.

Overall these video sunglasses  are fantastic and it’s something I can take with me on a variety of trips, cycling, running windsurfing,playing with the kids,  etc. And because they’re light sunglasses you can take them off hand them to someone else and become a character in your own video, instead of just creating POV videos, all the time.

They are not cheap they retail for about $299/pair (down from the original $349), certainly pricey but when you factor in the convenience and quality of the video I think it’s safe to say it’s worth it.