Took part today in the 2013 edition (31st Annual)  Wyckoff triathlon.  Its very popular ( usually has over 900 participants) local triathlon held in the Franklin Lakes/Wyckoff area. The race itself is a somewhere between a sprint and   Olympic distance race. Its a  800m swim, 17mile bike and 5 mile run.

Pre-race Getting up about 5a gives me plenty of time to get there and setup. one of the reasons I like this local race Weather was perfect sunny but not too hot. Also this was a wetsuit legal swim ( water temp 69°f). The race is well organized and transition area is nice marked.

After a brief moment of silence to honor a fallen fellow competitor ,followed by the national anthem. The race started right on schedule.

Then lake swim is an 800m swim in a counter clockwise rectangular course. Starting in the third wave I was hoping for clear water. I didn’t get a chance to warm up in the water..something I like to do.

But it was not to be ,right from the start a lot of jostling and bumping. Every time I thought I had a rhythm going I would run into someone . I especially got kicked a bit this swim. Seemed like every other swimmer was swimming breaststroke and kicking with their legs. .after the first turn buoy  things settled a little but it was short lived after the second turn buoy again a lot of contact.

It didn’t help we were swimming directly into the sun. But continuing to move forward the big inflatables at swim exit made it easier to sight. Out of the water it was another .20 mile to the bikes..Swim felt OK but the excessive contact was irritating.

out on the bike course

Arriving at the bike the wetsuit can off pretty easily . and this was the first race where I had my shoes clipped in. It was a good decision, with my wetsuit off and helmet on. It was onto the bike course. I hopped on, fiddled a bit getting my feet atop the shoes and then slipping them on.

I didn’t feel my  bike start was as fast as last year. But I quickly gained speed and settled into a rhythm. This year I felt I kept pace better than last year many fewer riders passed me. The climbs also seemed easier. After last weeks disintegration on the run , I was very conscious of not push too hard on the bike and may have left a little out there.

Around mile four near the top of a short rise, I felt my saddle move and tip up, crap! the saddle must have loosened from being on the rack. And now it was in an uncomfortable up angle for my delicates. So for the rest of the ride I tried to stand when climbing or minimize the pressure from the saddle nose. Same as last year at about mile 8 we saw the race leaders heading back, this year the bike was much closer top 5 where within seconds of each other.

Into the park and again pretty uneventful. Just kept pushing. Athlete #294 passed me around mile 10 then it was a back and forth till transition. After cresting the only small climb at mile 14 , it was downhill back to transition. Seeing the cones I popped my feet out of my shoes and road the last .2 miles atop of the pedals. This makes it very easy to dismount and run into transition.

Out of T1 onto the run course

With no bike shoes to undo, I slipped on my Kinveras  ( My Newtons tore up my feet pretty bad last week) and off on the run I went. I felt comfortable the whole run. Although there was still a slight tinge I my right calf from the bad cramps less than six days ago. But I continued forward, and while not quite reaching my goal of running sub-8 miles, I held a pretty even pace throughout the run..

The run course was altered this year and it seemed more gradual on the up hills, although the downhill at 3.5 was pretty steep and hard on the legs. After mile four its a straight shot home (unlike last year where you had a 1/4 mile loop into right as you were approaching the finish). Then it was just a matter of powering through to the finish.

Done beat my time from last year by ~3.minutes. Here’s the breakout from last year’s race. Sadly neither my swim or bike was much faster..

I think most of that came from my slightly  faster transitions, and a steadier paced run. I may have left something on the course , I wasn’t spent, and after last weeks miserable 70.3 run, it was much nicer to finish strong.

Overall happy with my performance, could have had a faster bike, but all in a all a good day.

I’m already itching for my next full tri (although I’m I
The swimmer as part of a relay in two weeks) , I don’t have another till West point in mid August, may have to do another before then. 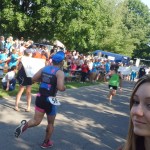 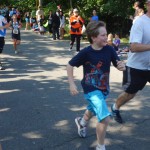 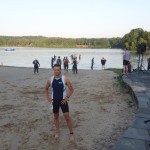 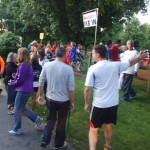 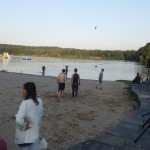 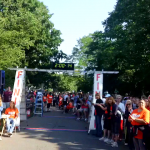 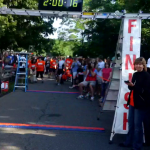 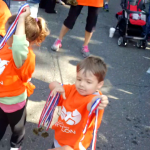 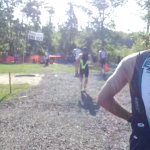 Out of T1 onto the run course