Finally we have had some nice weather, and this last Sunday myself and a group of friends once again met at Branch Brook park for the 39th  edition of the Essex County Cherry Blossom 10K, my local hometown race. This year I choose to do this race instead of Rutgers half marathon which was held on this same weekend.

This year the usual cast of characters was there except for Christine, who was recovering from recent back surgery. So our group included speedster Devang, Duncan, Steve G,  Nick and myself plus many more local familiar faces from the running community.

My goal this year was pretty simple, try to go under 50 minute. My running has been more consistent this early season , but consistent doesn’t translate into fast..Weather this morning was low 50’s and sunny, just about perfect running weather, considering how cold its been.

Devang runs past at start

As 10am approached, we lined up. I was besides Duncan and Nick and Steve. We waited for a few announcements, and then the  horn went off… Right at the start there’s a little rise, and with the excitement and  energy everyone is pretty excited and moving up the hill . I took off quickly and left Duncan, Steve and Nick to follow.

The first mile was going pretty well, I know my running style and I need to have fast early miles as I know my middle to end of the race pace  is always disappointing. Gong through teh first mile in about 7:20, I just needed to hold the pace to make it a good race. I didn’t see Duncan nearby, which surprised me since last year he past me before mile one.

Running towards mile two another decent mile 7:36 and feeling pretty good, again looking around and trying to keep moving knowing that a slowing pace was possible..

As I crested the first hill around the 2.75 mark , still felt pretty good, but clearly was pushing hard my heart rate was stuck at about 169bpm and I was using that as my effort gauge.

As we approached the 5k mark I could see the race leaders already heading towards the 4 mile mark, Devang was in the top 11  at this point. As I came across the  short turnaround  right before the 5km timing mat,

that’s me in light blue sneaking in just under 50′

I noticed Duncan about 20-30 secs behind, and now with my slowing pace, I was certain he would catch me. At the top of the park near the Basilica turnaround , I saw Duncan ws indeed making ground . On the downhill leg I saw and waved to Nick and shouted “Steve” as I could see him just about hitting the 5km mark.

Steve locked in a battle as he reaches the finish

Around mile 4 Duncan finally pulls up besides me and we run together for another quarter mile before he slowly  pulls away.  My pace was slowing but it was still decent for me and I just need a little more endurance to hold this faster pace in the later miles.

As the last few miles approached, I tried to minimize the number of runners who passed by me as that is a measure of how stable your pace may be..  Duncan was never too far away and was always within visible range.

After crossing Heller Parkway and approaching the 6 mile mark (which never seemed to arrive) , I managed a short sprint under the small bridge leading to the finish area.

Once again the crowd is there to urge you on. After I finished we waited for Nick and Steve to come through then it  finally it was time to celebrate and commiserate.. and enjoy the sunshine . 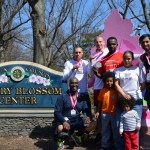 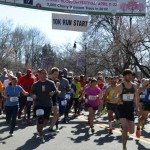 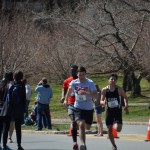 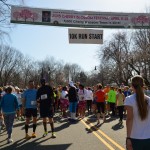 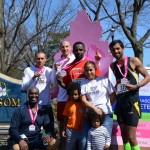 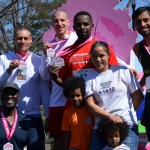 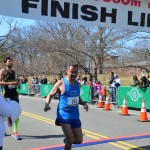 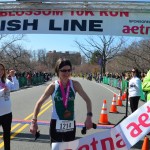 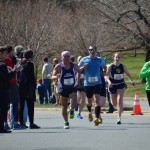 that’s me in light blue sneaking in just under 50′ 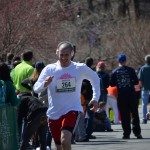 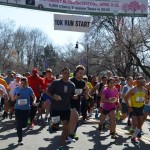 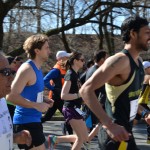 Devang runs past at start 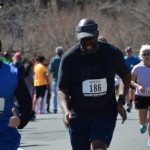 Steve locked in a battle as he reaches the finish 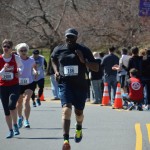 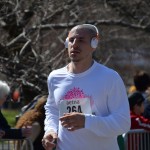 Nick crusin’ to finish , wonder what he’s listening too 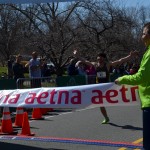