This was the second race of my weekend, yesterday I had done a 5-mile trail run.. Because of the unseasonable cold winter and Spring I  didn’t expect many blooms this year in the 2014

edition of the Essex County Cherry Blossom 10K at  Newark’s Branch brook park. This race is   a popular 10k race held in early-April (typically during the height of the cherry blossom bloom) and sponsored by the Essex county parks system.  There’s another even more popular Cherry Blossom Race 10mile in Washington DC also taking place this weekend.

One of my favorite courses because..

This is my personal favorite running race of the season, because its the one in my backyard I run through this park frequently and its the only race I can actually walk to the starting line, love that!  The park was designed by the the Olmstead Landscape architectural firm  ,the  same renowned American Landscape  architectural firm  that designed Central Park and Prospect Parks.

This will be the third year , all three of the three running amigos are running this race, as usual we will be competing against each other..  I saw Duncan a few weeks earlier at a 20K and he looked strong so this year, I think it’s anyone’s race, but my bet was on Duncan  to set a new PR for himself.

Also running the race for the first time this year is our friend Nick,we had done  a 5k and duathlon with Nick a few years back and we did manage to get past him, rumor has it that he too has been training and we be looking to re-claim bragging rights..  Nothing like friendly competition to liven thing up..

My goal this year was pretty simple, try to improve on last year’s time. I set my 10K PR here last year so am looking to improve upon that..
Weather this morning was low 50’s and sunny, not bad running weather, considering how cold its been.

As 10am approached, we lined up. I was besides Duncan and Christine was further forward into the middle, none of us had seen Nick and weren’t sure if he was here. We waited for a few announcements, and then the  horn went off… Right at the start there’s a little rise, and with the excitement and  energy everyone is pretty excited and moving up the hill . Christine had lined up further in the front and moved pretty well forward. Duncan an I paced forward I slowly moved past him a bit , but approaching the 3/4 mile mark we both slowly reeled in Christine, as we passed her we mockingly wished her good morning..  From there I kept the 7:30 pace with Duncan till just before mile 1, when Duncan accelerated forward.

I was hoping to really push forward on mile two, as its a slightly downhill mile, but again the legs just wouldn’t respond. Duncan slowly but steadily inched away and I was waiting any second to have Christine pass me, but I kept moving.

Mile two came and went and at about 2.5 miles the race leaders were already coming back through approaching their 4 mile mark. Up the hill I went following the group , trying the best I could to hold my pace.

At the 5k mark is the first one of two quick turnarounds, and this would be my first opportunity to see how far Christine was. As I came across the 5km timing mat, I noticed Christine about 20-30 secs behind, and now with my slowing pace, I was certain she would catch me. At the top of the park near the Basilica exit, I saw Duncan who was already on his way down and I’m sure on his way to a fast time. I pushed forward not paying much attention to my pace and mostly keeping an eye on my heart rate, I was mostly in the 160’s which is a bit low for me.

I proceeded on, never really able to pick up the pace, I just didn’t feel like I had any snap in my les and could seldom keep up with some of the other runners that past me… But nonetheless I held a low 8 minute pace through the end .

With Heller parkway Ave in sight , it was only about 0.3 f a mile to go and I don’t know where but runners started coming up from behind fast and furious, so I kicked it in the best I could but wasn’t able to muster the same finishing kick I had last year..

When I finished I waited a minute for Christine to finish and then to our surprise our friend Nick crossed the line a few minutes later., finally it was time to celebrate..  Duncan set a new 10k PR and he beat my PR from last year by about 20 seconds.. good for him! We then spent time talking and catching up…eating some post-race food and enjoying the day and encouraging other finishers… 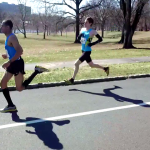 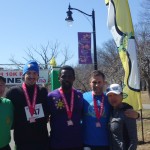 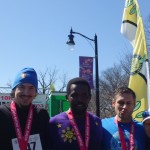 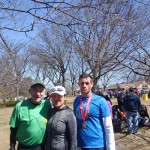 Bill, Christine and me 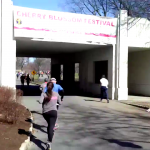 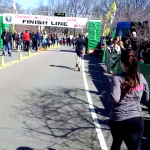 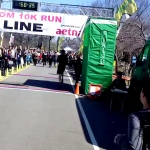 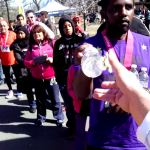 Ducan greets us at finish 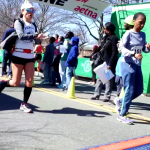 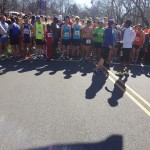 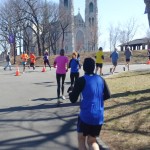 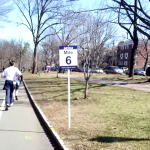 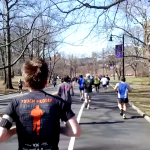 Nick! left side of road 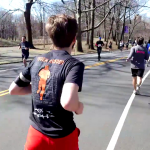 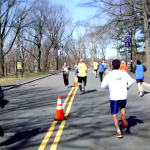 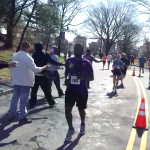 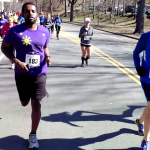 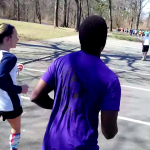 Duncan passes me near mile 1 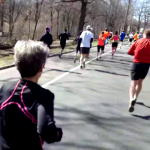 Antoinette goes s past me at 8.2mph 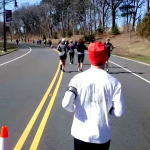 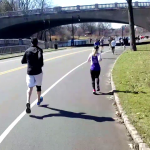 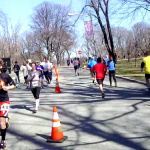 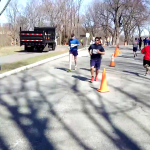 Christine right behind at 5k

finish line from other side 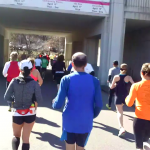 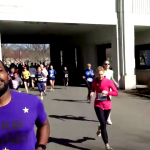 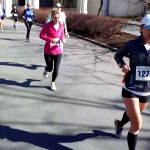 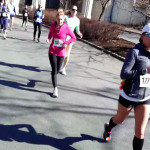 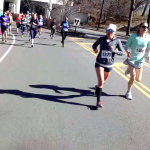