Once again it’s mid-April and time for the Rutgers 13.1 Half marathon in New Brunswick.

The half-marathon course, is road race traversing most of Rutgers new Brunswick campuses.It starts near the Livingston campus, loops around to the Busch Campus, before crossing the river and finishing on College Ave. This year the course had a slight deviation from mile 3 to mile 5, we spent sometime on Joyce Kilmer Ave. before rejoining the nal course on Avenue E. I was hoping when I noticed this, that the extra distance would mean we would skip the loop around Buccleuch Park at the end, but this was not the case…

My goal this year was simply to run a sub 1h:50m I knew I had a strong time for me last year and was hoping to maintain a similar time within a minute or two

Running Trio back together

This year Duncan joined us, and he was looking for retribution for his narrow 2nd place among us finish in 2012.  I had no illusions of tangling with Duncan this race, as the last few times I had seen him, he was running pretty strong. Christine was her usual quiet self before the start  and did not make and predictions.

As usual we got there on time and parked a block away from the race finish and took the shuttle to the start. Being the third year, this routine is becoming pretty regular. The weather was a cool 60deg at the start with sunshine , it was a perfect day for running. After  some photos and chatting with other participants it was time to get down to business. After the national anthem it was off to the start, as usual, the 6000+ strong runners, slowly move forward and  begin crossing the timing mats at the start. All three of us run together briefly until the first right hand turn, when I decided, let me try to hang with the 8-min pacer. This lasted about 2 miles, as I came up besides and briefly passed the 8-minute pacer as we headed towards mile three.

At this point things were going ok, I was keeping up with the pacer, and felt ok. as we approached the third mile, I was expecting to see the leaders come by on the opposite side of the road, but because of the new course change I only saw a brief glimpse of leading runners as they moved further north.  Still in front of Duncan and Christine, I was losing contact with the pacer, as I saw the pacer sign and red balloons which one by one were flying off the sign, move on out further ahead.

Duncan right behind me near mile 4

At the 5k mark I saw my split and this was the first sign that things were falling apart.. this wasn’t last year or even the year prior. Normally at this stage I would begin my run of sub-8 minute miles . I was in the low 8’s but at least 30sec per mile off my pace.. Approaching mile four Duncan appears on my right and we chat of few words, I take one final photo with him behind me and wish him well. He slowly begins to pull away. My pace further slowed by about 30 sec.

Approaching mile 5 , Christine appears on my left side and after a few words of encouragement, she too begins to move forward. I didn’t feel the snap in my legs, occasionally I would muster a short burst of speed, but I was never able to hang onto to any runner slightly faster.. then it was back through the start. Nearing mile 7 one of two turnarounds allows you to see the runners further up the road. I saw Duncan and about 40 seconds later Christine,  they were well past the 10 mile mark. It was also at this point the morning sunshine and heat were starting to creep in, surprisingly this year’s temperatures were a bit warmer at the finish.

Now I was approaching more of a jog than a run. Just trying to maintain some sort of pace but it slowly kept getting slower. Mentally since I knew I was trailing the trio, I just didn’t feel the need to push and used that as an excuse to let my pace slow. Its funny in races how you begin to bargain with yourself as the discomfort grow. This year’s 10mile turnaround was a bit different. I again saw Duncan about a minute behind the 1:45 pacer and Christine a few minutes behind that.. As I turned around and headed to mile 10 I saw an ominous sign the 9/min pacer wasn’t too far back, and at this point I just wanted to do a sub 2:00 run.. As I began entering the last loop around the Park , I caught view of Duncan about to turn onto College Ave. He was a good 10 minutes ahead at this point..

As is the case my legs are very heavy at this point, and this year was no different, It didn’t seem as heavy as last year, mostly because I wasn’t running as hard for the first 10 miles, some I was fatigued but the change it pace was more gradual because I was sucking wind earlier and much slower… miles 11,12 were the dreaded loop around the park, I always suffer here.. As we began the loop the 9min/mile pacer passed me and I felt further dejected.. This year suffering was less because I was walking more.. every water station was a walk.. and every other walker encouraged me to walk…. The final turn onto College Ave. and the finish line crowed bouyed my enthusiasm a bit more and seeing the Scarlet Knight greeting the finishing runners, put a smile on my  face.   I was over another 13.1 in the bag.

Race Finish, blurry due to water on lens

Duncan and Christine waited for me to finish, Duncan was concerned after seeing the 9min pacer finish before me, but my shitty performance was to blame not some mishap.Congrats to Duncan for setting a new PR for himself and also amongst out little trio… Christine ran a respectable time albeit off her personal best.. me I was just glad I finished… Duncan waited for a few co-workers to finish and cheer them on..

Post race we  received our finisher’s medal shuttled into the amenities tent, grabbed our goodie bag, and then lounged a bit around the college grounds .

Overall it was as usual a fun event,  and the finish area on College ave is always bristling with enthusiasm and satisfied finishers… It’s a great first half marathon to do .. try it out if you can. 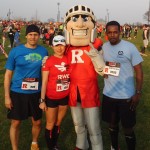 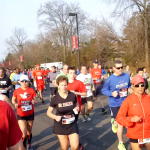 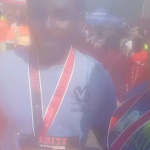 Race Finish, blurry due to water on lens 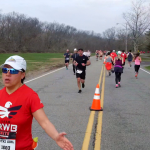 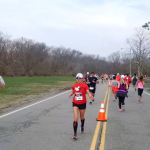 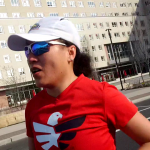 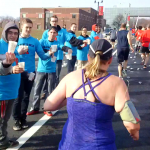 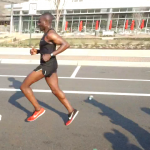 Elite runner out for a jog 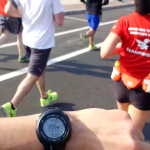 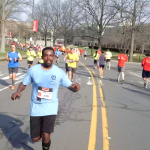 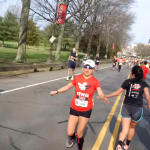 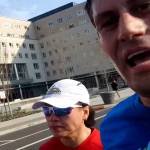 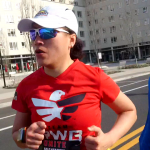 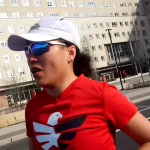 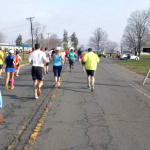 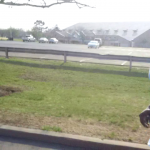 Duncan passes me near mile 4 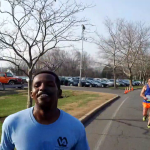 Duncan right behind me mile 4 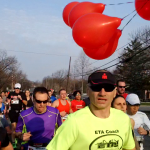 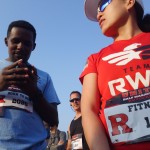 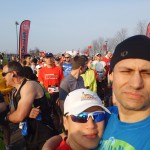 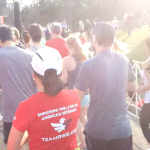 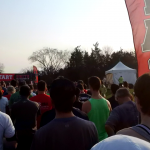 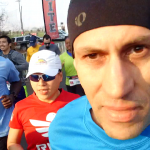 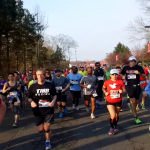 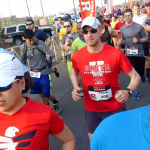 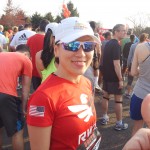 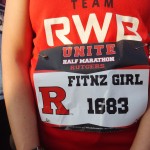